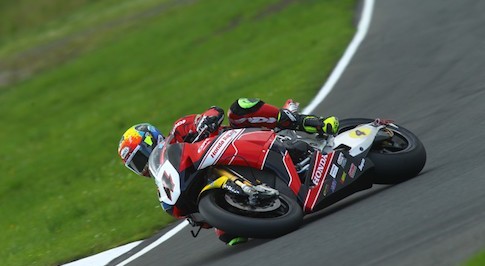 The Honda Racing team are confident in their preparation for this weekends' MCE British Superbike Championship at Brands Hatch in Kent.

The team has a strong presence in BSB history, having previously secured three titles, which makes them the most successful team in the paddock.

The 27-year-old commented: "The Brands Hatch GP circuit is such a great track and I can't wait to get out on the Fireblade and start getting some laps in! We're really making progress now and every time we finish a race we're closer to the front, so I'm looking forward to seeing what I can do at the weekend and hopefully come away with some more solid points towards the Showdown  another podium finish would be quite nice too!"

There is a lot to race for in the 6th round of BSB, after MCE BSB bosses announced that they would be putting up a £50,000 cash prize for a Kind of Brands title.

The top three starters on the grid will be offered the chance to sacrifice their front-row slot and start from the back of the grid.

Their challenge will be to charge from last position to first, and replicate Neil Hodgson's famous achievement during the 2000 season at Oulton Park.

The highest placed King of Brands contender will receive a trophy, but if they win the race they will receive the £50,000 cash prize. Second position would be rewarded with £25,000 and third with £10,000.

Whilst only the leading rider is eligible to win a top-three bonus, any rider that accepts the challenge will receive £5000 and double championship points.

Lintfoot said of the challenge: "Sunday's race will be exciting with the 'King of Brands' challenge, so looking forward to seeing what we can do and hopefully I'll have the choice of choosing between the front and back row!"