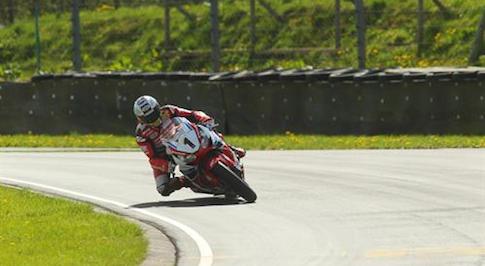 Day one of the test saw the team complete a full day on track. However, overnight rain and intermittent showers on Wednesday morning meant McGuinness and Cummins were only able to hit the circuit that afternoon on their Honda CBR1000RR Fireblade SPs.

The outing proved positive for both riders who were testing various Dunlop tyre compounds, trying out different electronic settings and fine-tuning the suspension with the K-Tech engineers who were on-hand.

The Castle Combe test was the second time McGuinness has ridden the CBR this year, following a test in March at Monteblanco in Spain. The 21-time TT winner is feeling confident and fit ahead of the North West and also this year's Isle of Man TT races after suffering a wrist injury last year, which affected both events for the 'Morecambe Missile'.

Teammate Cummins is in his second year with the Honda Racing squad and had a successful debut with the team in 2014, scoring three Superbike podiums in total with one at the North West and two at the TT. The Manx-man left the test day confident and looking to the races ahead.

The North West 200 takes place on 10-16 May, with McGuinness and Cummins competing for Honda Racing in the two Superbike races on Saturday 16 May. Forming a triangle between the Northern Irish costal towns of Coleraine, Portrush and Portstewart, the 8.970-mile course is one of the fastest in the world.