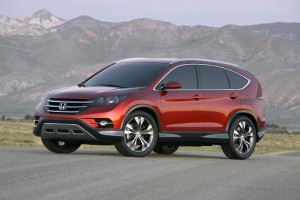 The new Honda CR-V has been given a sneak preview ahead of the 2012 Geneva Motor Show next month to get drivers excited about the compact crossover.

Although it will be officially presented on March 6th, the first images of the European prototype have been published.

Style is the real feature of the next generation model. According to Honda, the car adopts a "more aggressive stance" than past CR-Vs, with deeper sculpting along the body lines and a bolder front fascia.

Showing the car's capability to match other SUVs, the front bumper wraps upwards, yet the lower front bumper integrates more smoothly into the fascia to provide even better aerodynamics.

It is expected to be more lightweight than past versions, with lower emissions and more efficient power steering.

More details about the interior of the model will be revealed next week, but Auto Express claims that its steering and suspension will be the only thing adjusted for the UK market, keeping everything else similar to the US version.

The Honda CR-V will go on sale in the autumn of this year.