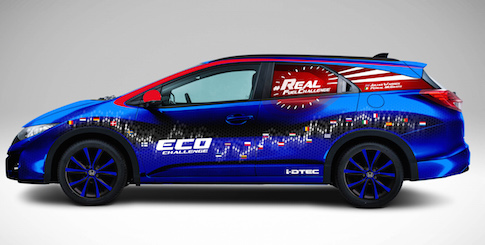 Honda has set a new Guinness World Record for fuel efficiency, following a challenge which saw one of its cars drive across 24 European countries using just £459 worth of fuel.

The pair of amateur drivers decided to undertake the expedition in order to demonstrate the impressive real-world fuel economy of the tourer. The title attempt meant adhering to strict guidelines, which specified that the vehicle used should not be modified in anyway, in order to replicate real world conditions. The car also had to be refuelled regularly, and the tyres inflated to the recommended Psi so as not to create any weight or driving advantages.

In each country visited, the pair had to collect a range of evidence, including logbooks, videos and photographs, GPS readings and independent witness signatures as proof. The car was also fitted with a TRACKER tracking device to ensure accurate monitoring of the route, journey time and distance driven.

The distance driven equated to travelling to Australia from the drivers' native UK, and saw them both behind the wheel for 380 miles  7.5 hours  a day.

Fergal McGrath commented: "It was tough, but we really enjoyed it, and setting this new Guinness Word Record title has made all of the hard work worthwhile."

Alongside setting the world record, the incredible fuel economy figures managed to exceed the Tourer's quoted efficiency of 74.3mpg by more than 25 per cent.

The pair put their success down to 'logical' driving methods and sensible route planning.