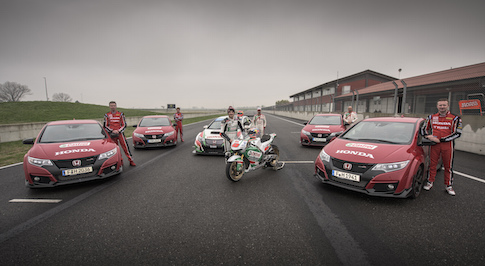 Honda celebrated its success on both two and four wheels during an event in Italy, in which the Castrol Honda Civic world touring car joined the LCR Honda MotoGP team and a selection of new Civic Type R's.

The event, taking place at the Circuito Tazio Nuvolari in Italy, brought together the worlds of car and motorbike racing for the day.

Guests also enjoyed passenger rides in the Honda Civic world touring car, which the road-going Type R is based on.

With regards to bike racing, LCR Honda MotoGP rider Jack Miller demonstrated his RC213V MotoGP machine, experienced the Type R as both a passenger and driver, as well as receiving a driving lesson from Tiago Monteiro.