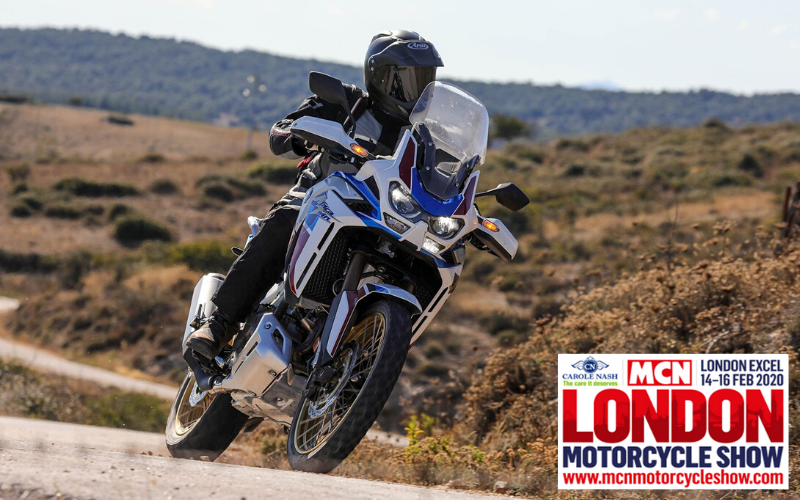 Honda are set to exhibit their big three at this weekend’s MCN London Motorcycle Show, as well as their other popular and powerful models.

Demonstrations and displays will reveal the bikes’ newest features and why they’re set to revolutionise the bike market once again.

- Chance to win a NC750X during Honda Adventure Week

Honda will be attending the 2020 Carole Nash MCN London Motorcycle Show on the 14-16th February.

After the success of Motorcycle Live, Honda’s flagship models including the all-new CBR1000RR-R Fireblade and CRF1100L Africa Twin(s) will once again go on display. The MCN show spans three days and will play host to over 20 Honda models on stand M19.

If you’re there on Friday afternoon, you’ll also see Leon Haslam who will be in Honda colours once again this season, aboard Team HRC’s, 2020 WSBK entry.

Fresh off the back of a fantastic launch, the CBR1000RR-R Fireblade will showcase the very best Honda has to offer in a track-focused, road-going performance bike.

It’s no surprise then that it boasts a 215bhp, inline-four engine and an aluminium diamond frame that benefits from HRC’s design know-how.

The range-topping SP will line-up, too, with its semi-active Ohlins suspension, Brembo brake set-up and quick-shifter distinguishing it from the standard model.

Another new arrival in the shape of the CRF1100L Africa Twin, in all its various derivatives, will star on stand, too.

No less than four will be on-hand, demonstrating the model’s range-breadth with standard, Adventure Sports and Adventure Sports Electronic Suspension versions on static display; an Adventure Sports DCT will be in action on the rolling road, bringing to life the benefits of the innovative transmission system and new features of the all-new adventure bike.

Honda’s technological tour de force, the GL1800, will appear in its sleekest Gold Wing form in the Gold Wing lounge.

Teaming a six-cylinder engine with a chassis tuned for comfort and a surprising degree of agility, the Gold Wing is a true tourer in every sense of the word. See for yourself this weekend.

From faired to naked, the CB1100 RS 5Four will bring style in spades. Based on the air-cooled CB1100 RS, as the name suggests, the 5Four is the brainchild of renowned bike builder Guy Willison, who has reimagined the model in his own Cafe Racer-inspired vision. The result, stunningly executed, is a tasteful throwback, one only 54 eventual customers will be able to lay claim to.

This weekend, there will also be a cross-section of models from the Super Sport, Street, Adventure, Scooter and 125cc – they’ll provide a flavour of the entire Honda range and prove there’s a Honda motorcycle for every occasion.

Catering for current and/or potential owners will be the Q&amp;A Tech Desk, where visitors to the stand can put their technical questions regarding all things Honda models past and present to our resident experts.

Honda Adventure Week kicks off on February 15th to coincide with the MCN show. Chief amongst the activities and offers run by participating dealers is the NC750X prize draw. Adventure Week provides another opportunity alongside the MCN show to see the all-new CRF1100L Africa Twin(s), along with the rest of the Adventure range, in your local Vertu Honda Bikes, where you can sign-up for test rides.

Those that purchase and register a NC750X in Adventure Week will be automatically entered into a prize draw. The winner will be reimbursed the invoice value of the On The Road Price of the commuter focused, adventure-styled model.

A trip to your local Vertu Honda Bikes is worth it to see the all-new CRF1100L Africa Twin range if nothing else. Lighter, more powerful and bristling with cutting edge technologies, the new variants have been overhauled to give riders the optimal equipment to tackle all terrains.