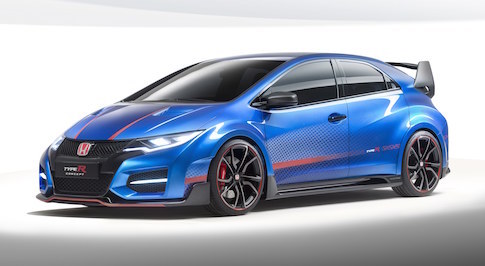 After five years of waiting, the Honda Civic Type R is back, boasting 306bhp and 400Nm of torque. For those eagerly awaiting the launch, only one thing is left to find out  was it worth the wait?

Far from a standard Civic with painted-on go faster stripes, this highly-tuned hot hatch has been aerodynamically designed to go faster. Everything that could have been modified on the exterior of the Civic has been, and the finished creation is a sleek, finned road car that wouldn't look amiss on the track.

The spoiler isn't just for show, either. It actually helps the Type R produce real downforce, whilst the front-wheel-drive defies the odds and stands out among its rivals of the rear-wheel-drive variety. Torque-steer  the usual downfall to front-wheel-drive-cars  has been minimised with a clever new front suspension setup.

Under the bonnet, the sports influence doesn't end. The VTEC 2.0 litre, four cylinder engine, paired up with a turbocharger (the first of its kind) may not be to everyone's taste but power is not lacking, nor is the engine roar  the pair of artillery-sized dual tipped exhausts ensure this. The turbo also keeps the economy figures of the Type R low, with Honda claiming 38.7mpg and CO2 emissions of 170g/km.

Inside you will find Honda's full suite of safety systems, which is comprised of blind spot warning, a cross traffic monitor, forward collision and lane departure warnings as well as traffic sign recognition.

All in all, the Honda Civic Type R is essentially a 'race car for the road'. It boasts impressive capabilities on both street and track  the electric power steering being quick to react and to the 306bhp coursing through the front wheels.

In standard mode the car will go from 0  62mph in 5.7seconds  with a top speed of 167mph - but engage the +R button and the engine becomes more responsive, allowing more torque at lower engine speeds, firming up the suspension and reducing the power assisted steering.

The Civic Type R has surpassed expectations to become something really quite good. A weapon on road and track, and the looks to match, the Type R does not disappoint.