Final win of the BTCC season for Honda 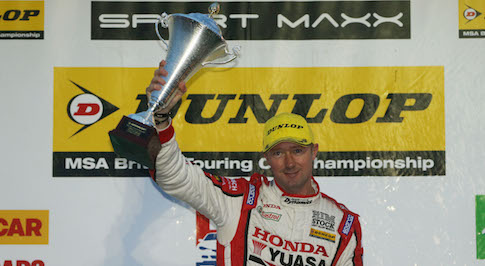 Final win of the BTCC season for Honda

Honda Yuasa Racing travelled to Brands Hatch's legendary GP Circuit off the back of a brace of challenging outings at Rockingham and Silverstone  and on a damp-but-drying track in qualifying. Shedden immediately signalled that the team was firmly back in business by clocking the third-quickest lap time in his Civic Tourer.

That theme continued at the beginning of the opening encounter, when a multi-car męlée at Paddock Hill Bend removed both drivers from contention on the spot. Shedden found himself turned around by an over-ambitious rival  who was later officially reprimanded for his rash move.

Hefty damage to the back of Shedden's car meant the Honda Yuasa Racing crew had no room to breathe before race two. From 25th on the starting grid in the first, Shedden flew through the field. Lapping fastest on the circuit on occasion, he superbly pinched seventh position on the finish line  which subsequently became sixth following a penalty ahead.

That left the Scot fifth on the reversed grid for race three, by which point the heavens had opened with a vengeance. Immediately gaining a spot to fourth in the treacherous conditions, by the end of lap three he was up into second and he artfully manoeuvred his way into the lead on the entry to Dingle Dell chicane on lap four.

In torrential rain, Shedden thereafter sped away from his pursuers at a rate of knots, building up a healthy margin before a mid-race safety car intervention and sprinting clear once more when the action resumed. A commanding third victory of the season was just reward for his and the team's efforts  and cemented his third position in the final championship standings. He set fastest lap by more than a second for good measure.

Honda Yuasa Racing concluded the campaign placed third in the teams' standings, with Honda runner-up in the manufacturers' classification  motivation, affirms Technical Director Barry Plowman, to do even better in 2015.