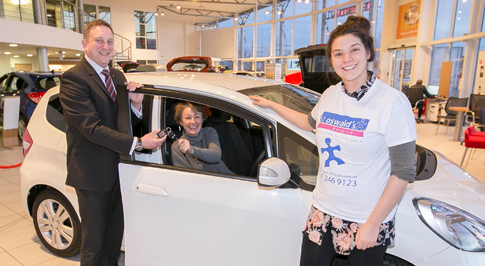 A Morpeth woman has won a brand new Honda Jazz in a raffle that raised more than £45,000 for St Oswald’s Hospice.

The car, which was donated by three Vertu Honda dealerships in Newcastle, Sunderland and Durham, was won by Anne Ballantyne after she bought a ticket for the hospice’s annual fundraising raffle when visiting her late mother at the Gosforth-based hospice.

Thousands of people entered the competition, helping St Oswald’s Hospice surpass its initial target of raising £45,000 to collect £46,259, which is the most the hospice has ever raised from its annual raffle.

The money raised is more than enough to pay the salary of a full time senior nurse for an entire year, and goes some of the way towards the £7 million that St Oswald’s needs to raise every year through its own fundraising in order to continue to deliver its high quality palliative care to adults, children and young people in the North East.

Collecting her prize from Vertu Honda Newcastle, Anne said: “I’m absolutely over the moon to have won the Honda Jazz, I didn’t think I would win when I bought the raffle ticket; I was just happy to support St Oswald’s Hospice.

“When I got the phone call to say I had the winning ticket, I was overcome with emotion. My mam, Jean, recently passed away after spending almost three weeks on the inpatient ward at St Oswald’s, and my family and I had visited daily.

“The whole team did so much for mam and the family in such a short space of time. Even our dog Robbie was made so welcome, and that made a huge difference at such a difficult time.

“I know first-hand the amazing work that St Oswald’s does, which is why I wanted to support the raffle. I just can’t believe I won.”

Richie Carrigan, General Manager at Vertu Honda Newcastle, said: “We’re so pleased to have been able to help St Oswald’s raise such a staggering sum.

“The fact that it is a local organisation that works with people in the North East makes it even more special for us and demonstrates the important role that local business has to play in supporting charities and good causes.

“We will be opening a new Vertu Honda dealership in Morpeth this summer. That dealership will be equally as involved in supporting local charities and causes.”

Helen Alderson, Fundraiser at St Oswald’s Hospice, said: “We are so grateful to Vertu Honda for donating such a wonderful prize for our Annual Raffle. Having the car to take to our events was such a talking point and we were delighted to raise a massive £46,259 in total.

“This is the highest amount that our Annual Raffle has ever raised and it is enough to fund the salary, plus additional costs, of one full time senior nurse working in our children’s, inpatient or outpatient services.

“This allows us to continue providing specialist care to local adults, young people and children with incurable conditions in the North East. A huge thank you to everyone who bought a ticket and congratulations to our lucky winner.”